What to See and Do in Gisborne

Apart from holding the distinction of being the first meeting place on Aotearoa–New Zealand soil between Māori and European in October 1769, Gisborne is a place of many firsts

December 12, 2018 • Words + Photos: Justine Tyerman or as credited
Gisborne, the most easterly city in the world, is the first city on the planet to see the light of each new day; it’s where Māori landed their voyaging waka (canoes) in the 14th century after navigating across the Pacific Ocean; it’s home to Millton Vineyards and Winery, the first producer in New Zealand to gain Bio-Gro certification for organic wine production in 1989; and it’s not far from Rocket Lab, the world’s first private rocket launch pad at the tip of Mahia Peninsula.

Take time to check out these places in and around Gisborne and soak up some history before you head out on the road.

When visitors come to Gisborne, locals always drag them up the steep steps to the scenic lookouts on Kaiti Hill, known as ‘Titirangi’ in Māori. You can also drive up if steps aren’t your thing.

Take in the breathtaking views across the bay and the fertile flats dissected by three major rivers. It’s a perfect spot to view Young Nick’s Head (Te Kurī a Pāoa), named after Nicholas Young, Captain James Cook’s cabin boy on the HMS Endeavour, who first sighted the sheer white cliffs in October, 1769. Near the top, there’s a controversial statue of Captain Cook overlooking the bay. Is it Cook or not?

Cook stepped ashore for the first time on Aotearoa–New Zealand soil at a site marked by a tall obelisk at the foot of Titirangi – it’s near where the historic first meeting between Māori and European took place in 1769. Tragically, the encounter was marred by a series of misunderstandings that resulted in the deaths of several Māori.

Initially Cook had planned to call the bay Endeavour Bay after his ship, but instead he named it Poverty Bay because he couldn’t get the provisions he needed here.

However, the bay will soon have a new name that dates back centuries. In October 2018, the New Zealand Geographic Board, Ngā Pou Taunaha o Aotearoa, confirmed a proposal to change the name of Poverty Bay to Tūranganui a Kiwa/Poverty Bay. Tūranganui a Kiwa means ‘the great or long-standing place of Kiwa’ the navigator of the Horouta waka (canoe). Kiwa was the first to step ashore 800 years ago, on the beach near the Turanganui River.

Visit Tairāwhiti Museum and Art Gallery which is one of the best regional museums in New Zealand. The museum has excellent permanent exhibitions about Māori and colonial history as well as regularly changing contemporary exhibits.

Next door is the 28 Māori Battalion C Company Memorial House, a moving tribute to the 1000 Māori men of Tairāwhiti who served in WWII. Their war effort is famous in Tairāwhiti.

Stop at the Saturday morning Gisborne Farmers’ Market near Tairāwhiti Museum to buy fresh produce. The market has been operating for 10 years and has grown to incorporate a wide range of goods including organically-grown and gluten-free products.

For wine-lovers the best place to get an overview of our magnificent wines is Crawford Road Kitchen, right on the waterfront by the inner harbour. Sheltered by hills, Gisborne’s warm, dry climate and soils create fabulous, full-flavoured wines. The region is the self-proclaimed ‘chardonnay capital of the world’.

Gisborne is not all about wine though. Sunshine Brewery has been making delicious batch-brewed beer using all natural ingredients since 1989. One of the oldest independent breweries in New Zealand, Sunshine has a base close to Waikanae Beach.

With 30 per cent of New Zealand’s best surf breaks within 10 minutes of the city, surfing is a big deal in Gizzy. The remote, unpopulated, white and golden east coast beaches are stunning. 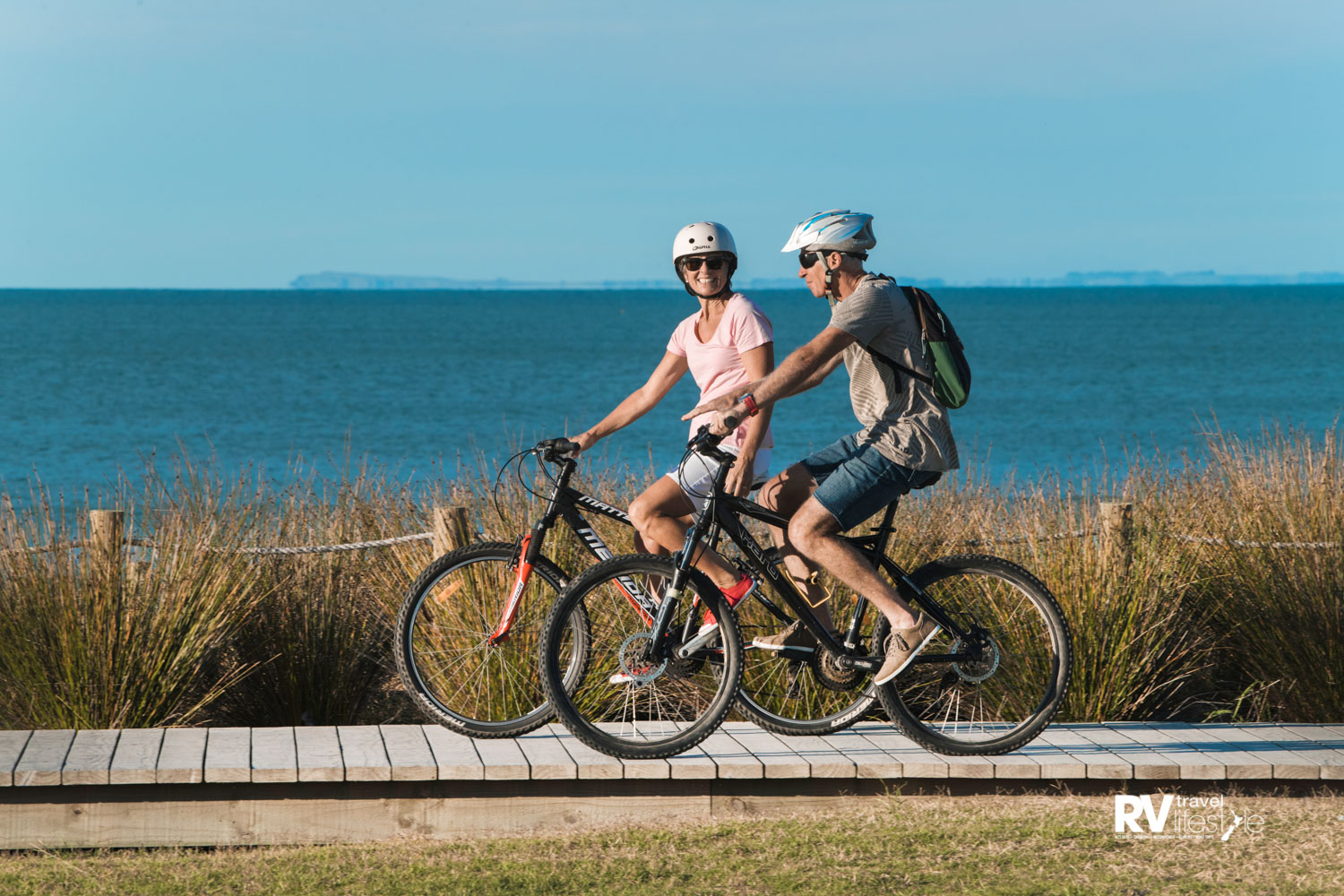 We eat so well at home that it takes a lot to drag us out to a restaurant, but we make an exception for Ussco Bar & Bistro. Located in a historic former shipping company building near the inner harbour, Ussco offers simple, seasonal and exceptionally tasty food in a cosy, relaxed environment.

Never underestimate this little town. It’s full of eyebrow-raising surprises like Rhythm and Vines, one of the top venues in the world to see in the New Year. The music festival is due to celebrate its 16th year at Waiohika Estate this year. The three-day event runs from December 29 to January 1. The internationally renowned Paul Nache Gallery displays a collection of contemporary art that you would expect to find only in bigger city centres. Gisborne bar and gig venue Smash Palace won the Best Music Entertainment Venue at the 2016 Hospitality New Zealand Awards in Auckland, and the wildly-zany annual Terrier Race Against Time, a fundraiser started by a group of friends a decade ago over a bottle of bubbly, has raised thousands of dollars to help Tairāwhiti women battle breast cancer.

Several times a year, the Gisborne City Vintage Railway take their pride and joy, Wa165 steam locomotive, out of the shed for a run. Built in Dunedin in 1897, the locomotive is the only remaining Wa class engine in New Zealand. When a cruise ship visits the bay, the train pulls up at the wharf and puffs its way across a harbour bridge to a pōwhiri (Māori welcome) at a local primary school. It’s the only railway line in the Southern Hemisphere that crosses an airport runway – in Gizzy, planes give way to trains.

A couple of years ago, Gisborne’s Dome Cinema and Bar Restaurant was rated one of the 10 coolest dine-in cinemas in the world by Jetsetter magazine, the only one selected in Australasia. The Dome, described as ‘a funky 1920s speakeasy’, joined Cinema Studio 28 in Paris and The Montpelier’s ‘Backroom Cinema’ in London on the exclusive list. Squishy bean bags and old leather sofas provide a delightfully eclectic mix of modern, chic, casual and old elegance at the Dome, located in the billiard room of the former Gisborne gentlemen’s club. The ceiling has three magnificent stained-glass domes, hence the name.

Celebrate spring next year in Gizzy. It’s become a tradition here to shake off the winter with great exuberance at the annual Wine and Food Festival held over Labour Weekend. The festival celebrated its 21st anniversary in 2018 and is still going strong.

The Oneroa Cycle and Walkway linking Waikanae Beach to Midway Beach is a must. The views of the bay, the sunsets, and the cliffs of Young Nick’s Head, stark white against the blue-green sea, are stunning.

Okitu Bush Scenic Reserve walk is an easy 20–30-minute loop track near Wainui Beach through beautiful bush rich in native birdlife. The track climbs to a lookout with fabulous views over Wainui Beach to Tuahine Point.

The Makorori Headland walk between the surfing beaches of Wainui and Makorori is just across the road from the Okitu walk. At the top, look out over the vast, blue Pacific Ocean as far south as Mahia Peninsula and Portland Island and north to the Tatapouri Headland.

Eastwoodhill Arboretum, 30-minutes’ drive from Gisborne, is the National Arboretum of New Zealand. The 135-hectare site is planted with over 25,000 exotic and native trees, shrubs, climbers and flowers, the largest collection of Northern Hemisphere trees south of the equator. It was founded in 1910 by William Douglas Cook who used to wander around the property stark naked apart from gumboots and a sunhat.

Cycling is the perfect way to experience the best of the Gisborne/Tairawhiti region. Let Cycle Gisborne’s full-service hire and tours connect you with all that this stunning region has on offer! Meander through vineyards, enjoy city and beachside cycleways, or venture out onto the Rere Falls Trail, a heartland ride on The New Zealand Cycle Trail. There are ride options for everyone, such as the superb Eastwoodhill Express up to a two-day adventure. Plus, the Motu Trails are nearby! Head to Opotiki and take a ride on the wonderful Dunes Trail section of Motu Trails. If you’ve got a really keen cyclist on board, share the drive-and-ride of the magical Motu Road Trail, an old coach road packed with history. Then if you’re still seeking adventure, the Pakihi Track section of Motu Trails is a must. Be set free, with Cycle Gisborne and Motu Trails!