Here we discover the hidden gem that is Anaura Bay, out in the wilds of the East Cape.

May 11, 2019 • Words + Photos: Carl Rapson
Nestled between Tolaga Bay and Tokomaru Bay on the East Cape north of Gisborne, is the beautifully rugged Anaura Bay. It’s about 7km from the main highway, down a winding road that is often only wide enough for a single vehicle. Luckily there is not much traffic out this way, and the view that awaits you as you crest the final hill is more than worth the hairy drive in.

There are two campgrounds here, and we chose to stay at the DOC-managed one as we have a DOC pass that, for a one-off annual fee, allows us to stay at most of their camps – except over the Christmas and New Year period. 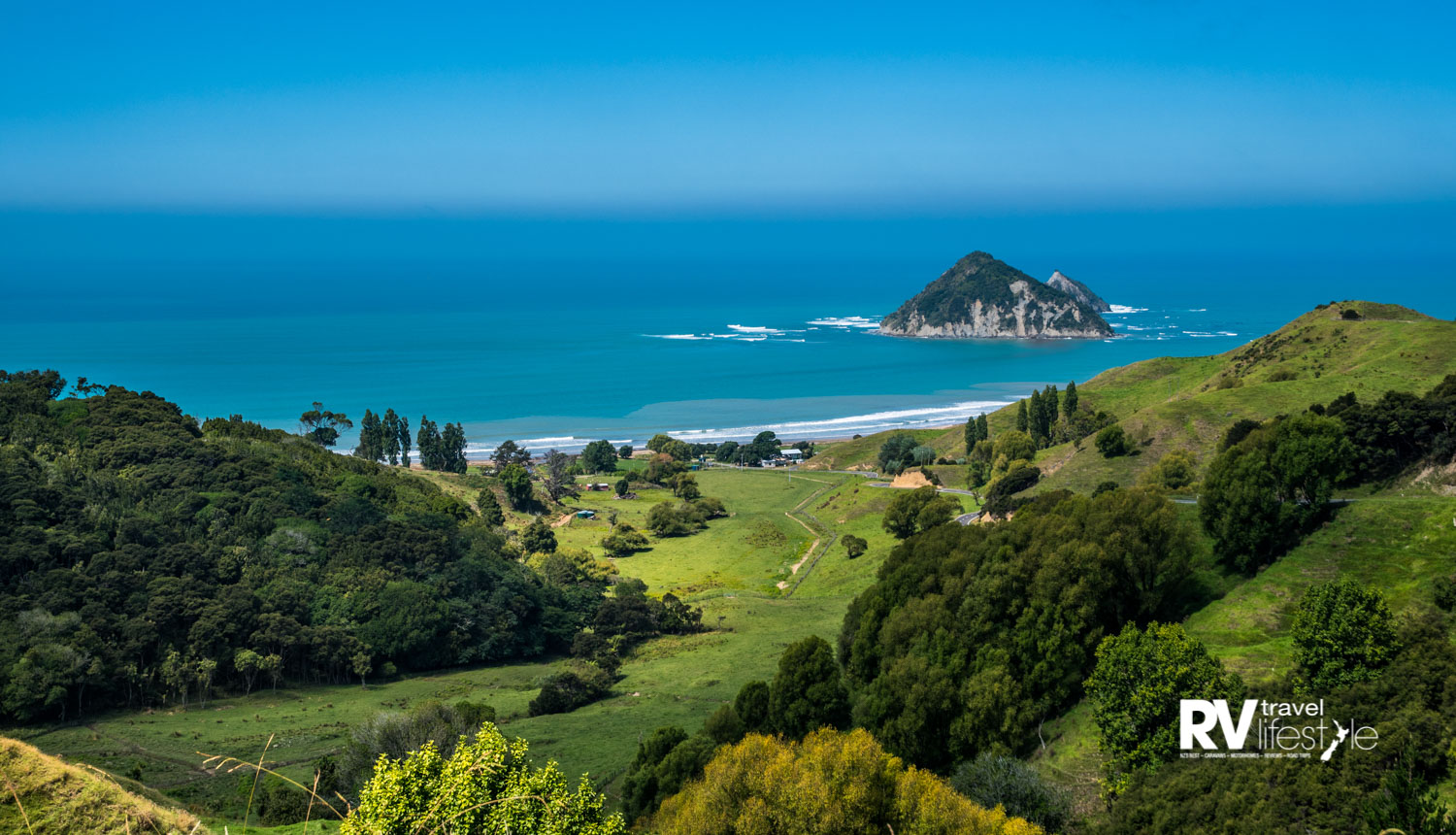 The campground is right on the beach and is slightly different to many other DOC camps in that there are no toilets or showers, so if you want to stay then you need to have your own toilet facilities. No problem for us, but the camp wardens were turning away quite a few tent campers as they didn’t have toilets.

After setting up camp, we headed down to the beach, just a few steps away, to explore. We’d spoken to the camp warden Marty, who’d said that the waves had been huge for the last few days due to a storm offshore, and had washed away the dunes that surrounded a lagoon on the beach.

The lagoon was now open to the ocean, and was filling and draining as the pounding surf pushed wave after wave up the beach.

The beach itself is stunning, with towering headlands at each end, with rolling hills providing a gorgeous backdrop to the beautiful white sands. 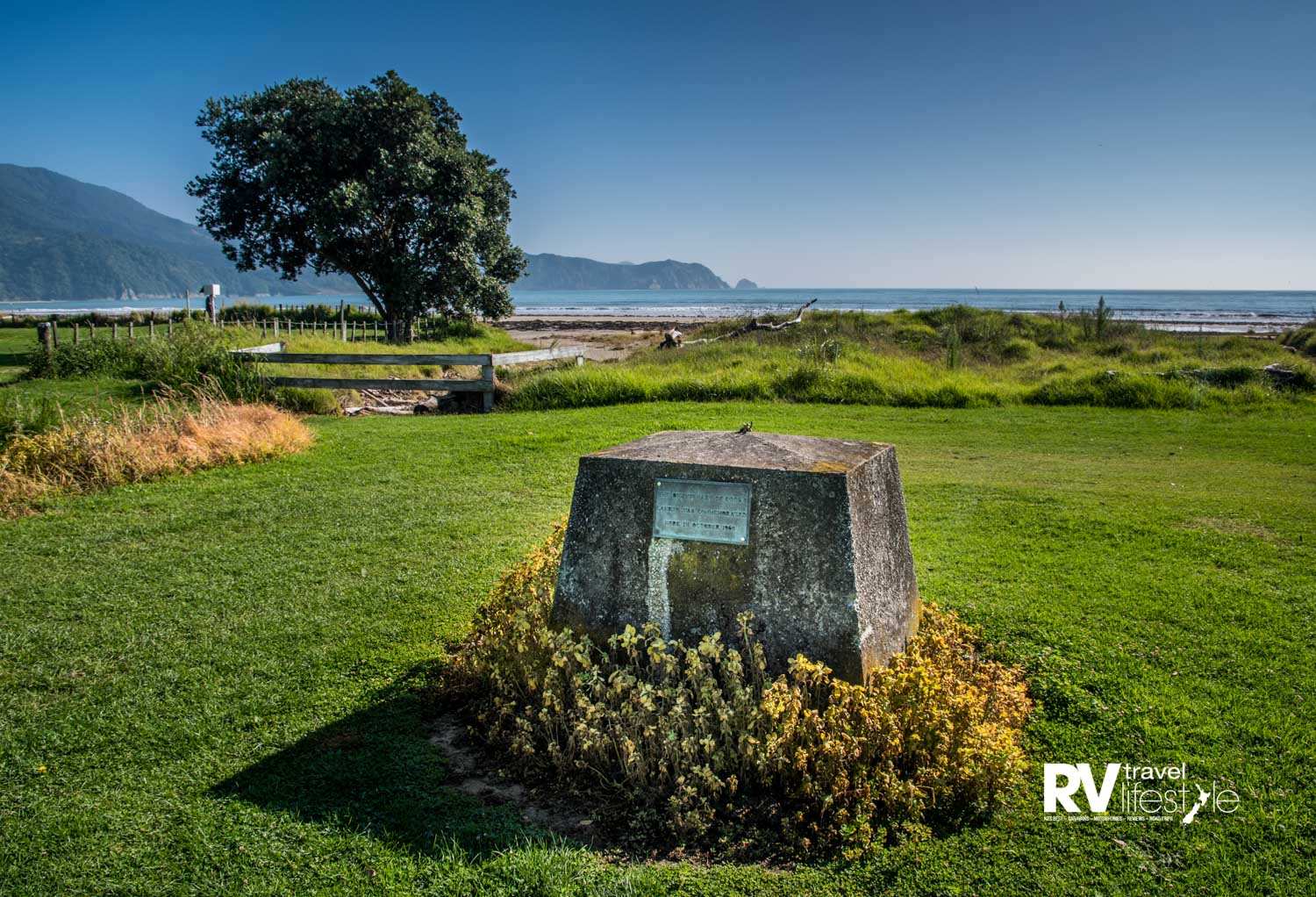 We went for a walk along the beach and passed many of the seabirds that make the lagoon their home, such as white-faced herons, oystercatchers, dotterels and pied stilts.

A little further up the beach were some cool baches, with outside toilets right on the beach. Talk about a loo with a view.

And hidden among the trees that line the waterfront there is one of the coolest tree houses you’ll ever see. Imagine waking up to that view from there every day. Might need a little work though!

At the far end of the beach, near to the commercial campground, is a monument commemorating Captain Cook’s landing here in 1769. On October 20 he sailed into Anaura Bay on the Endeavour, and from all accounts was welcomed by the local Māori in their canoes and given a warm reception by local chiefs. It was only the second time that Captain Cook had come ashore in New Zealand, the first time being the less-than-successful landing at Poverty Bay.

Imagine if Captain Cook had been using Instagram back then – how amazing would his pictures have been!

First place to see the sunrise

I was up bright and early the next morning but not early enough to catch the sunrise. As a photographer, I really should be better at getting up to see the first rays of the sun as they paint the landscape. It would have been all the more special as the East Cape is one of the first places in the world to witness the rising sun each new day. I was still up in time to catch the golden hour though, and as it bathed the landscape with fire it was truly beautiful.

We decided that after all this hanging around on the beach it was time to go and work up a sweat and go bush, so we thought that we would do the Anaura Bay Walkway that started right at the camp gate. There’s a sign at the start saying “This is a back-country track, proceed with extreme care” – as all of the bridges had been washed away in a storm – and advising to be very careful if you attempt the walk in the wet. It hadn’t rained for a few days so we figured it would be fine and set off up the track.

For the first 20 mins the path wound its way steeply uphill through native bush, passing a couple of clearings where we got a tantalising glimpse of the pounding surf in the distance.

The track then levelled out briefly as we entered a beautiful pine forest, before descending towards the valley floor and streams below. The sunlight here was diffused as it penetrated the deep forest, and the pools of light danced at our feet as we followed the track deeper into the forest. 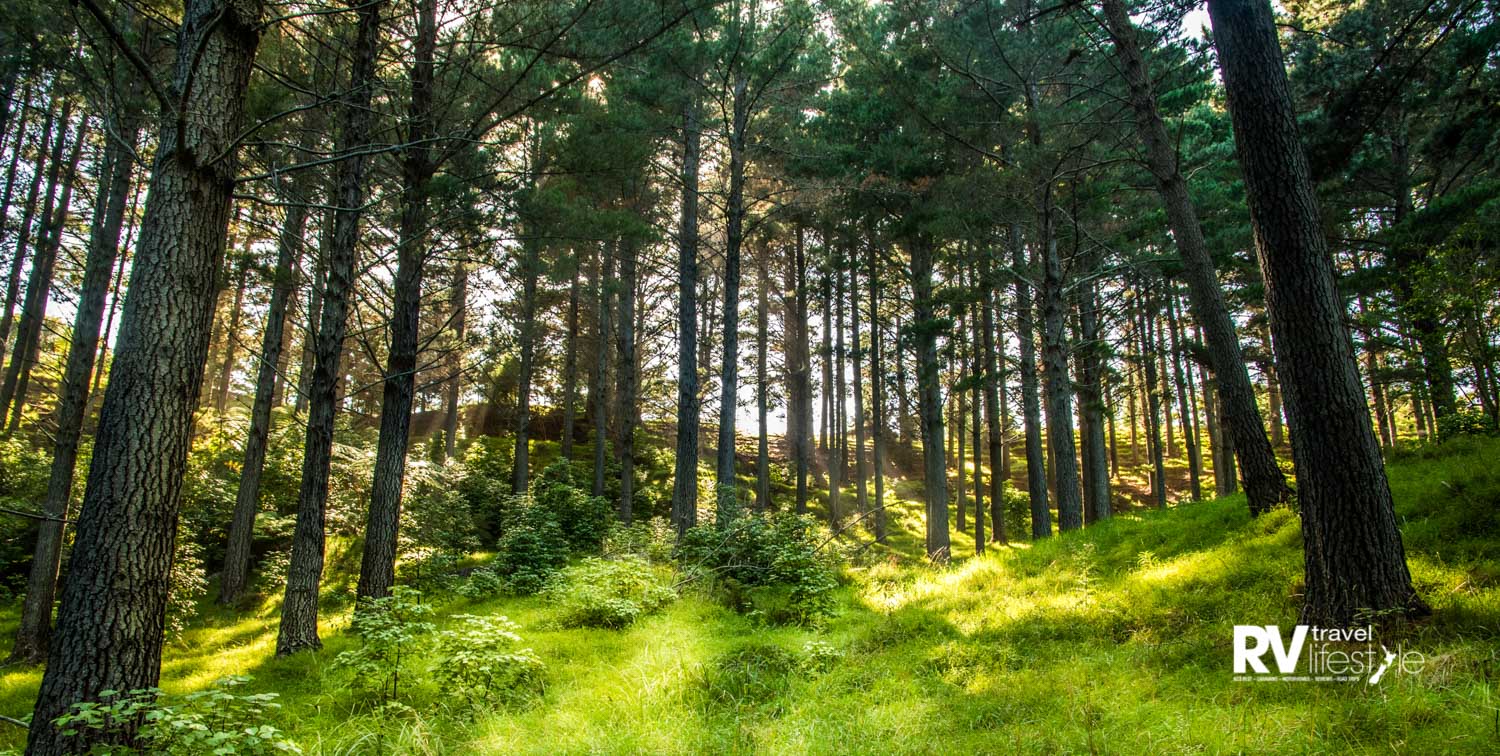 When we reached the valley floor we came across the first of many stream crossings. If there was ever a bridge here then it was long gone, leaving no trace behind. It would have been quite an easy crossing except we had to climb about two metres down a very slippery bank. The only way to do it was to use a fern frond as a rope to navigate the almost vertical drop, which was fun – and muddy.

It wasn’t long before we reached the next stream crossing. It was a little easier than the previous one, but you still needed to take care to make sure you didn’t end up sliding down the bank on your backside.

The track continued like this for a while, undulating between slippery slopes and steep climbs, from the forest floor to the banks above, and back down again. All the time we were being serenaded by an orchestra of cicadas as we weaved our way through the beautifully scented pine forest.

Eventually the track became one with the river and followed it to the ocean. There were multiple water crossings as we meandered along the river bed, but most had enough large stones to save our feet from getting too wet.

The final part of the walk opened out onto tree-studded farmland, but there were still many river crossings to complete, at one of which there was no choice but to get wet feet. Luckily, we were out in the sun by now, so it didn’t take long to dry off.

We saw giant fungi on the side of a dead tree, the growths were the size of dinner plates.

The walk is said to be a two-hour walk (4.5km) and it took us around 100 minutes so not too bad in the end. You never know quite how accurate the times are for the walks, although most seem to over-estimate the time it will take, which is good. I did add another kilometre or so to our walk though, as I made Justine come with me to check out an old bus I’d seen when we drove in. So cool.

Later on we got chatting to the camp wardens, Marty and Shona. Such a lovely couple and so interesting to talk to. They were childhood sweethearts and have been together since they were teenagers.

Shona is a fellow photographer and was a councillor in the Photographic Society of NZ until she retired last year. Marty has had various roles, including running his own outdoor adventure business, and has actually written a book about his life growing up in the ’50s and ’60s, and how things were so different back then. The book is called Never a Dull Moment by Marty Kibble, and I highly recommend it.

While we were chatting we thought we’d ask the guys a few questions about their travels:

How long have you had buses or trucks for, and what was your first bus/truck?

We’ve been travelling around in various buses and trucks now for around 23 years. We built our very first house-truck ourselves in 1995. It was called Tairua and was a bit of a beast at 4.2m tall and weighing eight tonnes. We eventually converted it into a horse truck for our daughter.

What bus are you currently driving?

Our current bus is a Toyota Coaster that we also converted ourselves. We’ve owned it for around 15 years now. We added the extra-high roof to it and we used it for our mobile signwriting business for many years, travelling from North Cape to Bluff. All of the quotes and sayings that adorn the bus come from our time as signwriters.

How are you enjoying your first camp warden position?

It’s been really great although not without its challenges. Who wouldn’t want to work in a stunning location like this. But, as at a lot of DOC camps, there’s always that element that want to sneak in without paying, so it keeps us on our toes. We’re both musicians so we’ve really enjoyed being able to jam with many of the campers too.

Lastly, what are your favourite spots to park up in NZ?

Lake Brunner on the west coast of the South Island would have to be our number-one place to spend a few nights at. It’s just so beautiful there and the views are to die for, especially at Iveagh Bay. Kaiteriteri, near Abel Tasman, is also a favourite of ours as it’s just so pretty there.

Life on the road

We had a great time catching up with Marty and Shona. Life on the road is all about the people you meet, the stories you swap, and the awesome places you hear about and think “I’ve just got to go there.”

Anaura Bay was one such place for us, as we had heard about it from a fellow traveller and vowed to check it out one day. It exceeded all of our expectations and we’ll definitely be passing by this way again before too long.

If you would like to read more of our travels, then you can check out our blog at www.lifeontheroadnz.com